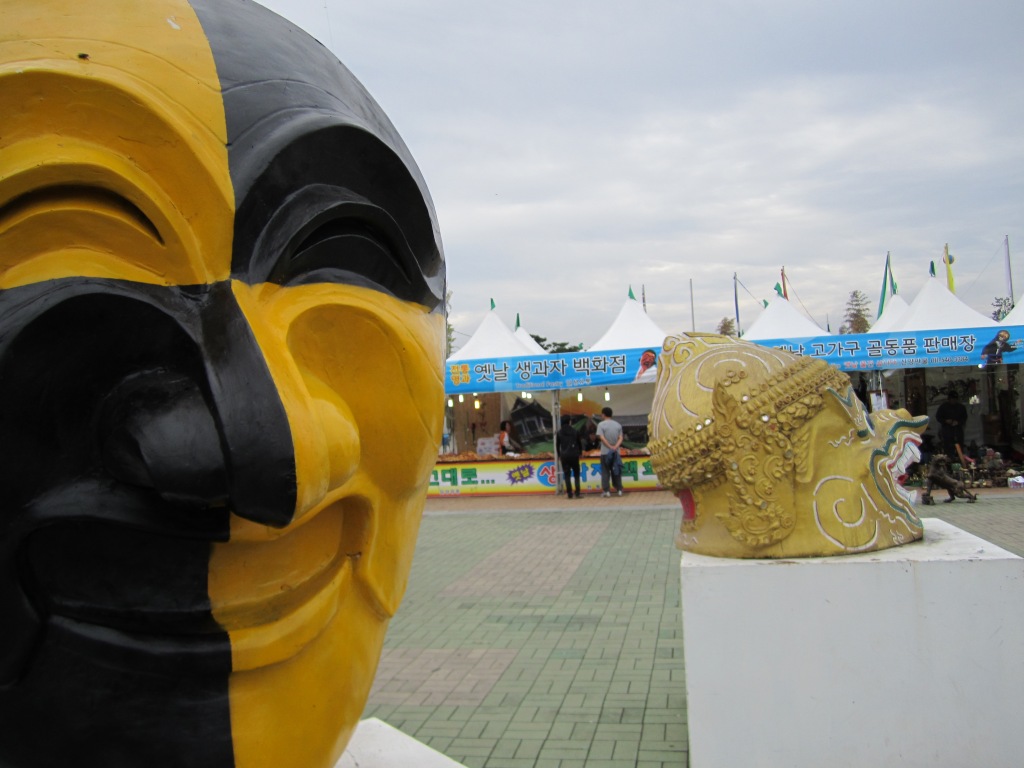 OK, maybe it wasn’t a scam.

Perhaps I should just chalk it up to linguistic miscommunication. It’s my fault for not knowing more of the Korean language, right?

But Chickpea is convinced. We were taken for a ride (forgive the pun).

We stepped out of the Andong Train Station at 8 a.m. and quickly realized we were some of the only people out and about in this city of 185,000. So, with no pack of tourists to follow, we aimlessly wandered the downtown region looking for a hint of the famous Andong Mask Festival. Except for a small stage downtown, we didn’t see anything that resembled the reviews we saw online. So, we wandered back toward the train station.

While looking at map, a taxi driver approached us.

We responded, “Mask festival.” We did absurd gestures of wearing a mask.

“Oh yes, yes,” he said and motioned for us to follow him to his taxi.

As a preface, most expats will tell you South Korean taxi drivers are truly honest. And although this was the first time a taxi driver solicited us, which was kind of weird, we have had nothing but pleasurable experiences in the taxi cabs here (if you don’t count the hair-raising driving skills).

“Where is he taking us?” Chickpea asked.

“I don’t know, but maybe it’s somewhere cool,” I reasoned.

While stopped at a red light, we talked again with our taxi driver.

After glimpsing a sign on the side of the road announcing the historic Hahoe Village — 20 more kilometers ahead — we realized what was happening. We had the taxi driver pull over and explained we did not want Hahoe Village, we wanted the Andong Mask Festival.

“Oooohhhh,” he said. And proceeded to take us to the front gate, which was about four blocks from the train station.

Twenty-five thousand won poorer, we walked around the festival grounds (which were huge) and decided to head back downtown until the actual performances began. Once we hit the area near the train station, three taxi drivers approached us.

You be the judge.

P.S. Although we never made it, the Hahoe Village is supposed to be another must-see in Korea. But instead of a taxi, take the bus no. 46 that leaves near the tourist information booth a block or two down from the train station. At about 1,000 won, it’s a much cheaper option. 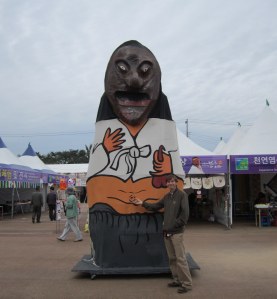 The Andong Mask Festival should definitely be on your must-see list if you make it to South Korea in the fall. With a full schedule of traditional Korean plays and dancing from all over the world, you won’t be bored. And even if your butt starts to hurt, the festival grounds are full of craft tents, food stalls and dozens of strange mask-related characters to pose with.

Check out our video!

2 thoughts on “Andong Mask Festival: The sights, the sounds, the scams (video)”