Before I dive in, let me start by saying that this is not intended to be an all-inclusive list of stuff to do in Seoul on Christmas. There are myriad fascinating things to do in Seoul every day of the year, and December 25th is no exception. A second caveat: Christmas is to Korea what Valentine’s Day is to the West — a couple’s day. If you’re thinking family gathered ’round the fire and decorating the Christmas tree, you’re probably S.O.L. But if you wanna explore one of the world’s largest cities during the hap-happiest time of the year, here’s Alex and Chickpea’s 24-hour itinerary: 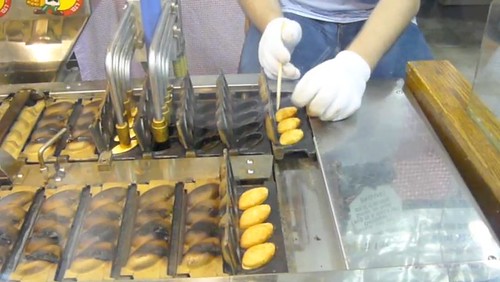 1. Breakfast of champions. If you’re looking for fast, cheap, and delicious (no doubt MSG-laced) breakfast, follow your nose to the nearest subway station. My favorite way to start the day is with a heaping bag of manjoo from one of the vendors who take up residence in the mass transit hubs. These cream-filled fluffy corncakes are so delicious you’d rather scald your mouth and stuff your face than wait for them to cool.

2. Take in the views from Namsan Tower. Also called N. Tower or Seoul Tower, this 237-meter behemoth towers over the city and provides 360-degree aerial views of the megalopolis below. A lover’s destination year-round, N. Tower was especially crowded with couples on Christmas. Pledge your everlasting love by inscribing a lock with a special message, to hang forever from one of the many lock-filled trees, banisters, benches and railings across the tower. Or, you can do what we did and pose with every mascot.

3. Forget the Christmas ham. You’re in Korea for Christmas, you might as well go all the way. If cheap and greasy is your style, try fishy odeng, spicy ddukbokki rice cakes, pa jun veggie pancakes or perhaps a double-battered, double fried, sugared corndog from one of the ever-present street vendors. If you’re looking for some soju to accompany your meal, try samgyeopsal (heaven on a grill) or pop into a kalbi joint. You won’t regret it. Try sundubu jjigae (tofu soup) if you’re looking for a lighter meal, or sample some bibimbap if a spicy mix of veggies and rice sounds good. If noodles are your thing (and they’re mine), try jjajangmyeon, a black soybean noodle dish commonly advertised as Chinese, but it’s all Korean. Trust us, you won’t run short of dining options in this city. (Just steer clear of the many Italian places. Alex is tired of the sweet-and-sour “spaghetti.”)

4. Get schooled at the Seoul Museum of Art. We took our second trip to this trendy art spot on our Christmas trip. Set back in a peaceful cobbled road near Deoksugung Palace, SMA has regularly rotating exhibits, both local and international. This time, we saw an enlightening Chagall retrospective; our first trip was the tasty multimedia smorgasbord Seoul Media City.

5. Take a time-out at the War Memorial of Korea. Yes, it’s sobering to learn about the tragedies of Korea’s war-torn past on Christmas, but it’ll also make you grateful for what you have, and you’ll leave in awe of how far South Korea has come in the last 60 years. Even the courtyard monuments could take a few hours to see; the museum itself is enormous. The War Memorial museum could fill an entire day, but since admission is often free (if not, just 2,000 won), we decided to take it one gallery at a time.

6. Run with the bulls in Myeongdong. The fashion heart of Seoul is throbbing with people on Christmas. If you don’t mind a crowd (hey, it’s a good way to stay warm), this is a sight to see. Seoul’s hip and trendy converge with tourists to shop, eat and people-watch here. And trust us, there is people watching aplenty. We even spotted a sign-carrying, loud-speaker wielding messenger of the Lord, encouraging the heathen masses to remember the reason for the season.

7. Warm up in Shinsegae. Named in TIME Magazine as one of the top Seoul sights, this behemoth department store includes more name brands than you can shake a stick at, along with a multi-floor food court and an upscale grocery. Plus, it’s a great respite from the cold. Bonus: it’s connected to the subway station and offers the best Christmas light-views in city.

8. Stroll the Cheonggyecheon. After warming up in Shinsegae, you’re ready for a riverside stroll, right? We were. We braved the single-digit temps to take in the most stunning (and eco-friendly) Seoul attraction. This underground stream — running nearly 20 feet below street level — used to be covered by a highway. But when a new city beautification project began, the stream was one of the first things to get a facelift. A mix of natural beauty and the ever-present blazing neon lights makes Cheonggyecheon the perfect symbol for Seoul. Take a walk, check out the underground art exhibit and light show, or pack a picnic.

Bonus: Public drinking is a-okay in Korea, so a stream-side bottle of wine is the perfect end to the day — if you’re willing to stay outside long enough to finish it.

3 thoughts on “Christmas in Seoul: Eight fun things to do on your expat ho-ho-holiday”