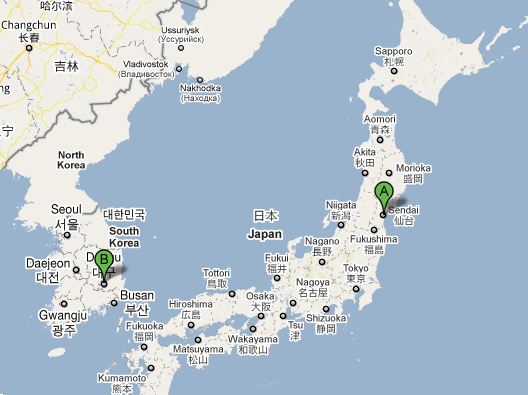 Yesterday, Chickpea and I were talking about the tragedy in Japan and speculating about  our friends’ and family’s geography skills. Do they know that just a few hundred miles of water separates us from the earthquake/tsunami/nuclear disaster that is Japan?

I can’t help feeling like we dodged a bullet here in South Korea. Sendai, the hardest hit city in Japan, is about 700 miles from us in Daegu – about the same distance from south Florida to North Carolina or San Diego to Mendocino in California. There’s still some worry about possible effects from the explosions at Japan’s nuclear reactors, but we probably won’t be affected. The winds and distance are in our favor, for now. (This has not stopped the English teacher community from speculating.)

UPDATE: The New York Times has an interactive map showing where the radioactive plume is headed.

Luckily, South Korea does not have to worry about its own earthquakes. They’re possible, but rare and not powerful. This is a good thing, because roughly 80 percent of all buildings in South Korea are vulnerable to quakes. That includes about 9 out of 10 schools. Not what I want to think about while writing this post at my elementary school desk.

Japan, on the other hand, was prepared. Looking at photos of the devastation, it’s hard to believe that Japan was possibly the most prepared nation for an earthquake/tsunami disaster. They’ve had early warning systems in place years before the 2004 Christmas Day tsunami. After all, tsunami is a Japanese word. If this quake had hit another country, we might see a catastrophe two or three times as deadly.

Still, it’s been tough to get the images of this tragedy out of my head. That might not seem like a feat, since the media is awash in pictures of the tsunami carrying away cars, homes and people, but with a new school semester I actually haven’t read one article about it before this post. Just a few clips on CNN were enough for me. It’s painful to watch these clips, knowing that dead bodies are beneath the water rushing through those streets. You can’t see them, but you know they are there.

It makes that 700 miles just a little too close for comfort.

On a more positive note: If you’re near Daegu next weekend, there is a benefit concert at URBAN in downtown Daegu. All the info is on the DIY Daegu Live Facebook page. It sounds like a great way to help out and cheer yourself up at the same time.