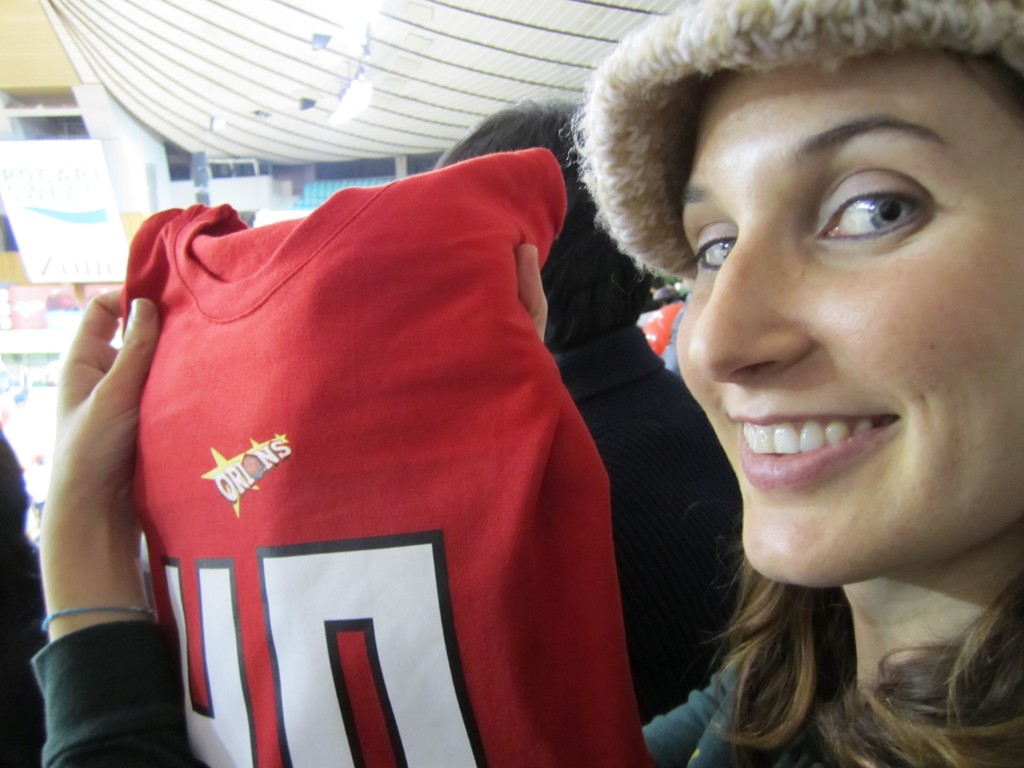 Before I extrapolate on the wonders of basketball in Korea, let me take a moment to celebrate the fact that it’s Friday; that I saw my first Korean snow yesterday; that my ondol heating system is on full-blast; that my open class is over (observations suck);  that I’m drinking a beer (even if it is Hite); that I’m snacking on string cheese, courtesy of Daegu’s Costco; and that I’ve got Creedence Clearwater Revival’s greatest hits as a soundtrack. The neighbors are in for an impromptu norae bang treat when “Bad Mooon Rising” starts.

Yes, life in Korea is good. Especially since I’ve discovered the Orions, Daegu’s very own, very crappy, basketball club. No one can ever call me a fairweather fan, though. I’ve already got a branded t-shirt, noise makers, and even a cell phone charm (so sue me) repping my new hometown b-ballers. But big ballers they are not.

I officially became a fan at my first-ever professional basketball game last Sunday, when we played the Incheon Elephants. Since then, I’ve learned a few interesting facts about Korea’s most under-appreciated sport. First off, to call this a pro club is technically accurate, but is misleading for fans of American ball. Daegu Gymnasium can host a whopping crowd of just over 5,000 — and it’s rarely half-full. I’ve seen high school games with more crowd enthusiasm. Also, there are a few club rules that are unfamiliar for US fans: teams can have only two foreign players (usually, two of their starters) and one Korean-American player. This is to prevent clubs from importing their entire team from abroad.

There are nine teams in  Korea’s pro league. Currently, Daegu is ranked eighth. Le sigh. Despite losing both games I’ve seen, the Orions are entertaining nonetheless. Their stars are Glen McGowan (who was injured in the first quarter of Tuesday’s game against Jeonju); Otis George (Crowd chants: Oh-ti-suh!); and my personal favorite…Number 40…it’s Lee…Dong…Juuuuuuuun! Yes, Lee Dong-Jun is a lanky, long-haired Korean-American (given name: Daniel Sandrin) who dominates in the paint and behind the 3-point line. Of course, it doesn’t hurt that he’s also modeled in Nike fashion shows.

So I’ve got the fan gear. I’ve got a favorite player. I’ve got plans to see many more games. What I don’t got is a winning team. The Orions were up by more than 20 points — yes, 20 — and still managed to lose to the Elephants last Sunday. I had hopes for Tuesday’s game against lower-ranked Jeonju’s KCC Egis. Alas, despite a rousing back-and-forth lead, we fell just five points short of a W.

You can’t blame the cheerleaders for the loss, though. Those gals were shakin’, poppin’, lockin’ and costume-changing as if the win and their adorable little lives depended on it. I also have warm-and-fuzzies for these ladies because, although I haven’t won any (yet), they give out free gear — from signed balls and jerseys to pizza and Pocari Sweat — throughout the game. Another +1 for Korean ball: the mascots breakdance. Take that, stateside b-ball fans.

Worth mentioning is that, with tickets at 9,000 won a pop (about $8), supporting the home team is extremely affordable. Nosh outside the stadium before the game at one of many street food stands (I always recommend a sugar-dipped, double-battered corn dog) or bring your own snacks into the stadium. Yep, I was spoiled by my hometown Tampa Bay Rays open policy on bringing your own food to the game, but the happy tradition continues, halfway across the world. Except that my now my game time snacks include dried squid.