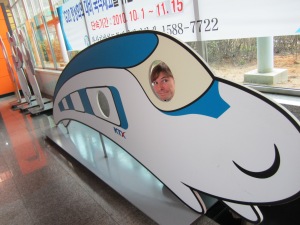 Life just got easier for far flung expats and Koreans who need to fly out of the country via Incheon Airport. On Tuesday, the second phase of the AREX commuter train opened, allowing passengers to move from Seoul Station to Incheon Airport in 43 minutes. It’s truly a belated Christmas present from Korea’s transit authorities!

As Chickpea and I were preparing for our upcoming winter vacation in Southeast Asia, we ran into an unexpected obstacle: getting to the airport. We assumed that all major cities in Korea (Daegu, Busan, etc.) were linked to South Korea’s main airport, Incheon Airport (ICN), and moving ourselves and a few pieces of luggage would just be a matter of taking the bullet train (KTX) to Seoul and then hopping on a subway or some other easy form of transport.

Before this week, travelers like us might have had several options, but all posed some logistical problem:

1. Take the Daegu to Incheon Airport Bus. Pros: Takes you right to the airport; no transfers; about 30,000 won makes it the cheapest option. Cons: Nearly 5 hour journey; can’t buy tickets online; only a few buses run each day (a problem since we want to leave right after we get out of school); possible traffic delays.

2. Take the KTX train to Seoul Station and hop on an airport limousine bus. Pros: Perhaps faster; not a bus; order train and bus tickets at the station for a discount. Cons: While the KTX may be fast (2 hours from Daegu) the times for the bus vary between 1 hour 15 minutes and 2 hours and that’s not figuring in any traffic delays.

3. Take the KTX train to Seoul Station, hop a subway to Gimpo Airport and then an express train to Incheon Airport. Pros: According to blogs and forums this is the best value; takes a little over 3 hours. Cons: 3 transfers (you have to transfer on the subway twice to reach Gimpo; big possibility of getting lost and confused and taking a few extra hours.

4. Take the KTX train to Seoul Station and hailing a taxi. Pros: Arguably the fastest. Cons: Over $100US in total; possible traffic delays

Of course, you still have these options, but now travelers in Daegu can board a comfortable KTX train to Seoul Station (just under 2 hours) and then hop on this express train straight to the airport (45 minutes). The cost? Roughly 39,000 won for the KTX ticket and 13,000 won for the express train ticket ($45US total). The price is even less if you take the slower commuter train to the airport (3,700 won) that will make 10 stops and delay you about 10 minutes.

What’s more, you can even check in with your airline — luggage and all — at Seoul Station.

In a few more years, the trip will get even easier. Korea has already started work that will allow the KTX trains bound for Seoul to go to straight to Incheon Airport . For those in Busan, this would cut a trip that takes roughly 6 hours now to only 2 hours 40 minutes. Wow.

The only downside is I cannot find where you can buy tickets for this train on an English website. If anyone finds out, please leave a comment with the info. I plan on just getting my ticket at Seoul Station.

Here’s a guide to getting those AREX tickets at Seoul Station. See you on the train!

UPDATE: A fellow English teacher reminded me there is another way to get from Daegu to Incheon Airport: by air. There is one flight each day from Daegu Airport to Incheon. I’ve read prices are 50,000-70,000 won. Still a bit expensive and not very useful, but could work in a jam. Here’s another site detailing all the ways to get to/from Incheon.