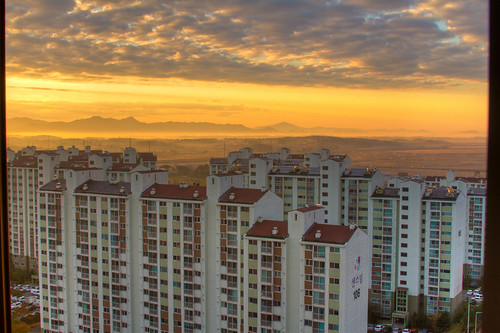 I had planned New Year’s Eve for over a month.

In true Korean tradition, Chickpea and I would take a train to the small city of Pohang on Korea’s east coast and head to Homigot , known for the large, eerie hand reaching out of the ocean. The annual festival would keep us entertained all night long — concerts, soju, fireworks, traditional games, soju, mascots to pose with, free food, more soju — until the sun’s rays peeked up over the East Sea horizon.

With thousands (millions?) of others across the country, we would watch as the first sunlight of the new year cast its glow on the Korean Peninsula.

Then, someone put foot-and-mouth disease in the proverbial punchbowl.

South Korea has suffered from an outbreak of foot-and-mouth disease since April, but it looks like efforts to contain it have not been entirely successful. And so, many festivals in the eastern provinces have been canceled. Look for a list of cancellations here.

If you don’t care about the festivals, though, you can still head to Homigot or some of the other places to watch the sunrise by your lonesome. The cancellations are not to protect your health: humans very rarely contract foot-and-mouth disease.  Agricultural officials are more worried that thousands of people tromping through these provinces will spread the disease to other areas.  Since FMD-tainted meat cannot be sold, this would have a deep economic impact on Korea’s domestic and export meat sales. That means more expensive galbi for those of you in Korea.

Plan B? Visiting a petting zoo.

Just kidding. We’re heading to Busan and watching the sunrise from a large mountain. You should, too.