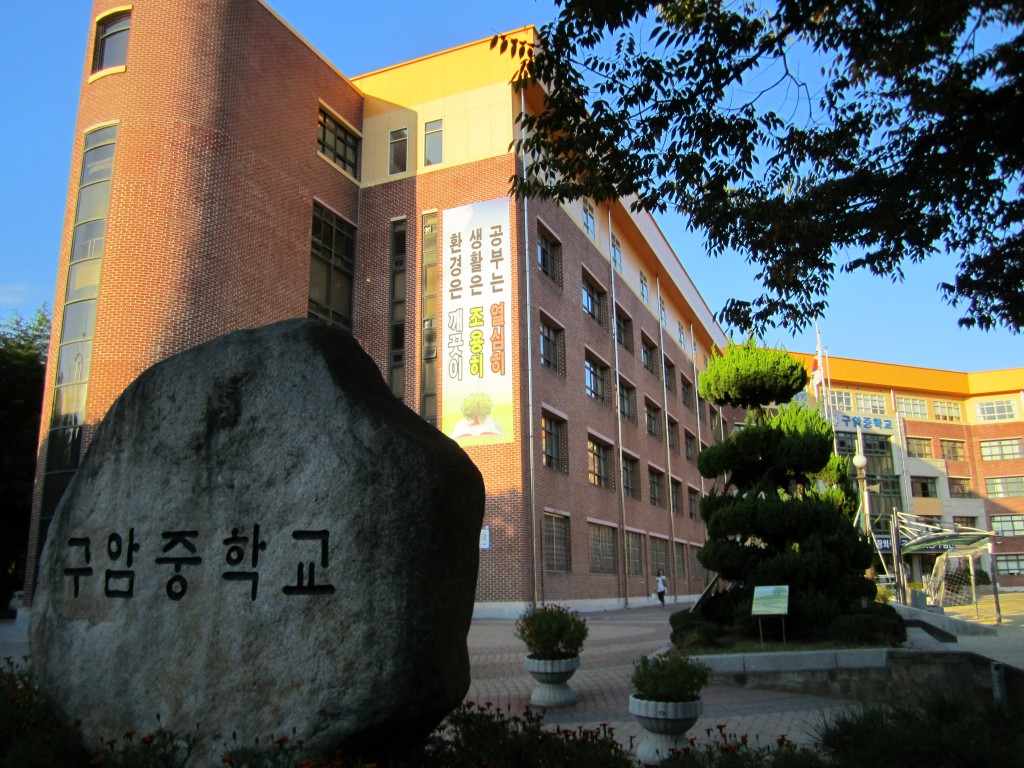 I am officially in my new apartment.  So much is going on, but I’ll try to keep it as short as possible. First of all, you can thank someone in my building for this post, as I’m using their unsecured wireless network. I probably won’t be able to get Internet at my house for about a month, since I need my Alien Registration Card to set it up, and that won’t come for a month or so. I’ll just have to hope Mister or Mrs.  Unsecured Wireless doesn’t notice that I’m using his connection, or use a PC bang (Internet cafe) until then.

My big lesson plan presentation yesterday went well — my group took second place overall, which was nice. I wasn’t too nervous, and I feel a lot better about writing lesson plans now. Thanks, EPIK!

Last night was fun — we had the farewell dinner and a talent show by our fellow teachers. It sort of felt like the grown-up version of the last night at camp. Of course, lots of people went out afterwards, but Alex was feeling sick and we had a big day today so we just packed out stuff and hit the hay early. Yeah, yeah, we’re old.

Today was, of course, the big day. We had a four-hour bus ride from the orientation site to Daegu, where we finally met our co-teachers. Turns out I am the first native teacher my new school has ever had. I think this is a good thing, since they have no preconceptions about Native English Teachers — some previous NETs give us a bad reputation. Also, that means they’re as new at this as I am, so that helps.

So, it turns out I’m teaching middle school — hoorah! In Korea, middle school is  the equivalent of grades 7, 8 and 9 in the U.S. (13 to 15 year olds). I’ll only be teaching grades 1 and 3 (7th and 9th grades). This is great news because it means fewer co-teachers and fewer lesson plans.

I also found out that I’ll have my own …… English Cafe! This may not seem all that exciting, but many NETs don’t have their own classrooms; they go from room to room as they’re needed. Plus, my room has all sorts of techie stuff that I’m sure I’ll rarely use, but it’s nice to have the option. 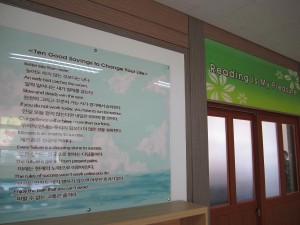 The only thing Alex and I were disappointed about it that we are on the outskirts of town, in an area called Seobu (Korean for “Northwest”). Of course, I was hoping to be in the downtown area, but even here it is bustling. Lots of neon, nore bangs (singing rooms) and restaurants, parks and schools.

I’m feeling a little down, though. Alex and I didn’t think about it until yesterday, but we have no way of getting in touch with each other to find out where the other person’s apartment is. My extremely helpful and very sweet co-teacher somehow called Alex’s co-teacher and tracked Alex down, so we were able to see each other for about 10 minutes tonight, but I still have no idea where his apartment is in relation to mine. Since we don’t have phones, and he likely won’t have access to Internet, it may take a while for us to find each other.  We are in the same area of town, but our co-teachers told us he is about 10 minutes away (by car) and they couldn’t give us directions from one place to the other. So I’m sitting my my apartment looking at all my luggage and beginning to feel a little overwhelmed. It is little things, like having no clue where or how to take my trash out, that make me realize what a big adjustment this will be.

I think because I am the first Native English Teacher at the school, they feel overly anxious for/about me. Three people came to meet me this afternoon — most schools only send one person. Thank goodness they did send so many, because my luggage was a huge pain in the ass to move, especially when we had to lug it to my second-floor apartment.

We went to my new digs, Gu-Am Middle School, and I met lots of other teachers, none of whom spoke any English to me. I got my textbooks and hope to look over them this weekend so I can have something planned for Monday. I’m going in tomorrow as well, but from what I understand, just to meet the principal and get a full tour of the school — not to teach classes, as I heard some people will have to do starting tomorrow.

Two co-teachers took me to a store called Home Plus, like a gigantic version of Wal-Mart. It was interesting and exciting, but the co-teacher who was better at English had to leave to pick up her daughter, and the other co-teacher and I struggled through an hour-long tour of the store. Most of our conversation revolved around which items were “cheapest.” She was very insistent on my getting the best deal. It would have been nice to be there alone, since I could’ve explored more or gotten more stuff that I want and need, but I didn’t want to drag her around for hours. I got some useful stuff like detergent and dish soap, but all I got to eat was peanut butter and jelly, Ramen and a bag of apples (Daegu is famous for apples!). Obviously, I’ll need to do more food shopping this weekend.

After our shopping trip, we met up with Alex and his co-teacher. Alex’s co-teacher drove us to my apartment with all my groceries, they had a quick look around and left. So now I’m here trying to unpack and calm my nerves. I have to walk to school tomorrow, and I only have a vague idea of where to go, so I’ll have to leave extra early in the likely event that I get lost.

I haven’t looked around my neighborhood much yet, but it looks really cute — an interesting mix of neon lights and nature-y stuff. The mountains are right there, and there’s a park directly across the street from my apartment, with basketball and tennis courts, benches, playground, the usual.

My apartment itself is tiny tiny, but no smaller than I expected. Actually, not much smaller than my St. Pete apartment. When you walk in, the bathroom is to the left of a tiny entraceway, where you’re supposed to leave your shoes.

Then you’re in the living space, where there’s just a bed and a wardrobe. Through the sliding frosted glass doors is what passes for a kitchen. It has a sink; a “range” (two gas burners, no oven); a mini-fridge (seriously,  I threw in a jug of water and orange juice, a bag of apples and some jelly, and it’s full); and a washing machine (woohoo!). Most folks  don’t use drying machines here, but that’s all right with me. I’m just glad I don’t have to lug everthing to the laundromat. Did I mention that the entire laundry room/kitchen area is about the size  of a modest walk-in closet?  There are three cabinets to fit all of our pantry items, cleaning stuff and dishes. We’ll be minimalists, to say the least.

In other news, my co-teachers said my pronunciation (of the few words I know) is pretty good. This is a difficult language to speak.  Something different about Korea (they warned us about this at orientation!) is that one of the first questions everyone asks is how old you are. It is not rude here. They ask because everything operates on a hierarchical system of respect. So, since I’m the youngest among my co-workers, I call them all an honorific title, meaning older/married woman, or older sister if I’m more familiar with them. The funny thing is, they all look my age, but are 30 or older and married with kids. I think their secret is all the kimchi. There are different greetings for everyone, depending on your rank, all based on whether you are younger, older, or the same age as whomever you’re addressing. There are so many different ways just to say “hello” and “goodbye” it makes my head spin.

One thought on “Welcome to Korea: Chickpea vs. Daegu”