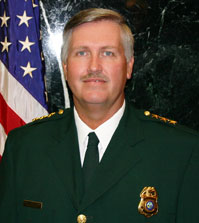 As a dorky newspaper-lovin’ teen in the mid 1990s, I often read Maxwell’s columns. When I moved back a few years ago, I was oddly comforted by seeing his mug again in my daily paper. I’ve always enjoyed his frank demeanor, to-the-point writing style, and mostly, his conservative, tough love approach toward St. Pete’s racial problems.

But his recent interview with St. Petersburg Police Chief Chuck Harmon? Gag me.

Maxwell’s fluffed up interview with the city’s top cop is so PR-friendly, I’m tempted to call police PR flack Bill Profitt and ask if he’s retiring. Is Maxwell positioning for a job as the newspaper industry falters?

Here’s why a tough interview in the city’s top daily is important:

Chief Harmon is a politician. It’s the nature of the job — police chiefs are political animals, subject to the winds of public opinion and whims of city officials. Sure, they have to run a department and act as top administrator for one of the largest facets of city government, but they must also report to their own boss. In this case, Mayor Rick Baker, and making sure it’s “another great day in St. Petersburg” has been Harmon’s top job requirement for some time.

So that means tough questions are in order, especially considering the myriad of issues at the St. Petersburg Police Department.

First, there is the perception of crime in St. Pete. By many accounts, the city is undergoing a crime wave. Just look at the string of violent gas station robberies that culminated into the shooting of an undercover officer. Of course, Chief Harmon insists crime is down. But as some suggest, that may just be a numbers game.

And this police administration knows a lot about numbers games. Two years ago, I reported on the department’s problem with keeping police officers. The SPPD was in the throes of an attrition problem that was sapping the department of its most experienced officers while failing to retain its new recruits. So to make it seem like the city had enough police officers, Harmon included rookies who could not yet be on the streets alone. Just this year, Harmon says they have reached the authorized level of officers — 540 — but now some say that may not be enough.

Then, there’s the very real issue of low morale. In 2007, an independent auditor released a study on the SPPD dubbed the “Matrix report” that found a majority of police officers felt they were inadequately staffed and were dissatisfied with their work environment. Complaints included a breakdown of communication between the administration and rank-and-file, pay issues and a series of disputed policies, like the one that prevents police officers from any car chase, unless it’s necessary to catch someone suspected of having committed a violent felony.

But Maxwell never touched these issues. He almost got there — like his question about Harmon’s seemingly distant demeanor and his failure to assure citizens that the SPPD is doing everything it can to catch the bad guys — but most of his questions just scratched the surface.

So what should Maxwell have asked? I prepared a handful of questions that gets a little more to the point:

I plan to send my questions to Harmon next week, even though unemployed journalists are rarely granted exclusive interviews. But I’ll let you know what he says. In the meantime, what would you ask Chief Harmon?

Founding Fathers-God billboards are a sham
August 20, 2009
Winter in Korea: When will my school turn on the heat?
December 1, 2010
St. Petersburg Mayoral Primary: At the Deveron Gibbons party
September 1, 2009

6 thoughts on “The St. Pete police chief interview I’d like to see”