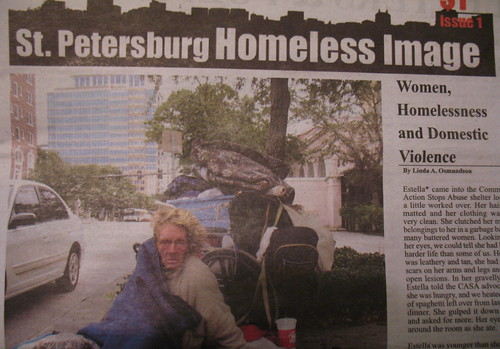 If you traveled downtown at all this weekend, you may have spotted folks hawking an unfamiliar newspaper.

The St. Petersburg Homeless Image —  a forum for advocates, homeless and formerly homeless people, students and the general public —  made its debut this weekend on the streets of St. Pete. The paper includes articles on the homeless lawsuit against the city, St. Pete’s designation as “Second Meanest City,” a blistering attack on the St. Petersburg Times for their recent article against panhandling and passionate obits on recent street people who died.

The paper is the brainchild of G.W. Rolle, a formerly homeless man who serves on the county’s Homeless Leadership Network. The project grew out of a need to provide accurate, passionate news and opinions to the people of St. Pete during an unusually hostile atmosphere toward the homeless. Plus, through a generous vendor program, the paper provides an economic opportunity to the city’s homeless. They can sell the paper for a profit and, besides getting some extra cash, learn valuable job skills. Rolle told me it’s a good alternative to panhandling.

The idea is nothing new. In 19 cities throughout the United States and Canada, “street newspapers” have proven effective in giving homeless people a “hand-up” instead of a “hand-out.” Street newspapers even have a national umbrella organization backing them.

If you pick up a copy — and you should — you’ll find a few articles written by myself and some homeless advocates across the county. The design and editing needs a little work, but the St. Petersburg Image is a good example of the kind of alternative journalism we need in St. Pete.