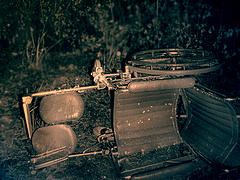 The title really says it all. Last month, the city of Tampa settled a lawsuit with Donald Smith, who sued the city and Lowry Park Zoo for not providing adaquate wheelchair access. (Get the agenda item here.)

What does this have to do with Lex Salisbury, the former zoo CEO who got run out on a rail last year?

In my first article about Lowry Park Zoo back in November 2006, former employees told me about an atmosphere that discouraged employee advice and provided a disconnect between employees, their supervisors and the zoo’s management. A city audit ended up backing many of those claims.

There are a few more of these suits, regarding various issues during Salisbury’s reign, still moving through the court system. Something tells me taxpayers will be paying more than the estimated $200,000 the city is looking to get out of Salisbury.