Since noon the previous day, I’d been traveling. First by taxi, then by train, then by subway and bus for a failed Vietnam visa attempt, then another train, a plane and soon another plane.

At the 20-hour mark, I was in Kuala Lumpur; specifically, I was inside the Air Asia transfer terminal, which gave me that first feeling of being in another part of the world. And yet, it was also vaguely familiar. It wasn’t until the blown-out speakers woke me from my failed attempt at sleeping that I figured it out. It was just like a Greyhound bus terminal: dirty glass windows; blown-out intercoms that were too loud but still unintelligible; a mass of people moving at once to clear out to the gate; second- and third-rate eateries with dubious menus and even more dubious prices; uncomfortable seats filled with travelers contorting themselves in an attempt to sleep somewhat comfortably; an entire world mix of ethnicities brought together by cheap seats.

It would not have been so bad if the previous seven hours on my Air Asia flight from Incheon, South Korea to Kuala Lumpur wasn’t so uncomfortable. Dirty plane. Small seats. No free meal. . Confused flight attendants. Horrible music that came on every time I managed to sleep for a few minutes. Not even free water. Air Asia is truly the “Greyhound of the Skies.” In fact, some flights are actually cheaper than a Greyhound bus ticket, so I guess you get what you pay for.

That is, if you can figure out how to pay for the ticket. Air Asia has some major problems with accepting major credit cards on its website. Some people contend these are intentional, others insist it is just bad programming on their website. Either way, when you’re trying to pay for your vacation and only have one or two credit cards, it’s maddening.

A few more hours in this terminal, then a few more thanks to a flight delay, and I’m off to Bangkok. Luckily, the next time I board a plane (about two weeks later), it isn’t Air Asia. 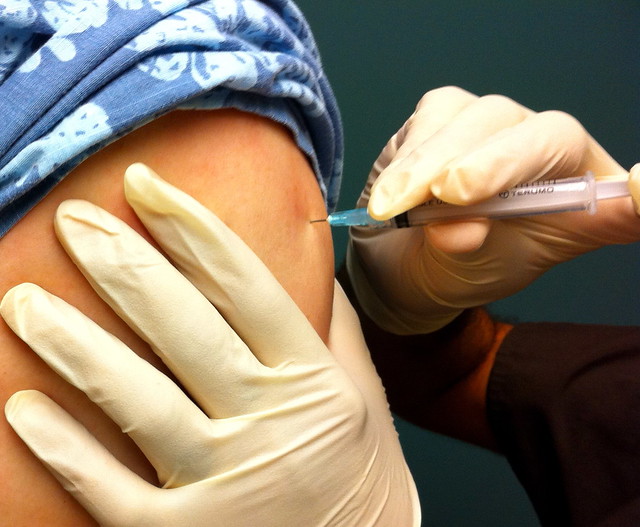 One shot and I’m out half a month’s rent. The other needle pierced my skin and I lost the other half. Welcome to the world of travel clinics, which exploit your fears just enough to empty your wallet.

Honestly, I partly blame myself. As the weeks until our Korea departure flew by, Chickpea and I started panicking about getting our vaccinations updated. Korea is no disease hotbed, but  we were determined to try as much crazy food as we could while in the country (and a few neighboring Asian countries as well) and a little typhoid sure puts the damper on international traveling. So, I pulled out the ol’ laptop and Googled “Travel Clinic.”

The first entry was for a Maryland-based company called Passport Health. They have an office in Tampa close to my former job, so without looking at any other options, we booked an appointment for the next week. Why would I look anywhere else? We had no health insurance (and even if we did, most insurance companies will not pay for vaccinations related to travel) and I figured most doctor offices would need to order our special vaccines from a place like Passport Health . I knew it was a specialty clinic, and so probably a bit more expensive, but I was woefully unprepared for how much more expensive. Not to mention the infuriating, and factually incorrect, introductory visit.

The day before our appointment, I looked up travel advisories from the Center of Disease Control and my trusty Lonely Planet Korea book. After a talk with Chickpea, we decided on vaccines to protect us from typhoid, hepatitis A & B and meningitis. We would also ask about the need for Japanese encephalitis.

The next day, after work, we walked into the travel clinic office and the receptionist quickly took us back to one of the nurses. We sat down in her office and she pulled out a thick book with “Korea” and our names on the front. She opened the first page.

“So, let’s start with malaria,” she said, and so began our hour of useless health information.