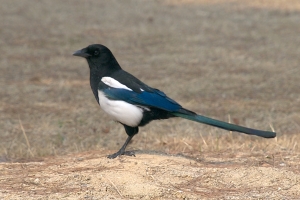 While the world watches and worries as tensions between the Koreas reach a boiling point (I’ve  been a constant visitor to Voice of America’s Twitter feed all day) I figured everyone could use some good news.

Last week, my co-teacher and I shuffled along a crinkly-leaf strewn sidewalk to Africa Coffee Shop in Chilgok to continue my Korean lessons. A bird landed in the withering grass nearby and began its peck-peck-pecking in search of food. I’d seen many of them since landing in Daegu. “What’s it called?” I asked. “Ggachi,” she said. “If you see one, it means you will have a welcome guest.” (I don’t know if it’s a self-fulfilling prophecy, but my co-teacher did visit my house for the first time later that week.)

I’ve been charmed by the ggachi since we first came to Korea. I’d never seen one before, and although they look pedestrian at first glance — like an outsized raven, maybe — upon inspection they’re beautiful birds. Striking white markings cover their underbellies and their wings are tipped with shimmering blue.

What my co-teacher said intrigued me, and I decided to do a little research of my own. Turns out that these bearers of good news and welcome guests are Korean magpies, or pica pica sericea. Of course, I was surprised to find that the Western symbol of greed, frivolity and vanity is one and the same as a Korean symbol of good.

So, as I sit here glued to my Twitter feed, fretting over North Korean nukes (and my English Winter Camp lesson plans) I’m hoping that Koreans got it right: maybe my magpie friend will bring a bit of good news.