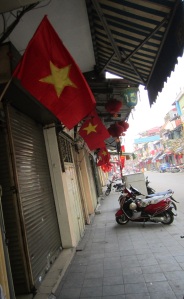 Once you land in Vietnam, you realize fairly quickly that you are in a communist country. In the main cities, red flags line the streets. On corners, propaganda-laden billboards and the face of Ho Chi Minh stare down at you. Yet, after a little while, you just view these as just another part of the curious scenes that unfold daily.

For us, the full realization of what it means to live in a communist country didn’t come until we tried to log in to Facebook:

It’s true. Without a fake IP address or some other workaround, you can’t access Facebook from within Vietnam.

It wasn’t always this way, which added to our confusion (some businesses proudly displayed Facebook websites). But in 2009, Vietnam began to crack down on Facebook, supposedly because some news events — easily controlled in the state media — began to run viral and, of course, unmanageable.

According to a recent Economist article, the Vietnamese government began another crackdown in late 2010 — just in time for the 11th Communist Party Congress, a five-year meeting among leaders to decide the country’s policy for the next 5 years.

Of course, we didn’t come to Vietnam to spend a day on the computer, stalking our friends back home. I would’ve liked to send a few messages to friends with birthdays and Chickpea had some addresses for postcards in her inbox, but it wasn’t anything major. Unfortunately, the Vietnamese aren’t so lackadaisical:

Internet-savvy Vietnamese quickly Googled solutions, shared them, and then used their blocked Facebook profiles to voice their annoyance at the Facebook block. One English-speaking city-dweller phrased their collective spirit succinctly: “FUCK YOU GOVERNMENT DON’T YOU HAVE ANYTHING BETTER TO DO THAN BLOCK FACEBOOK”.

I’m a little bogged down with applications, resumes and a friend in the hospital, but in the interest of being a regular blogger, I thought my readers should check out these links:

Tomorrow, “teabaggers” rally across the state. (h/t to Blast Off! for the teabagging reference and check out Pushing Rope’s analysis on a certain Florida politician)

Did Rush Limbaugh give away his show for free to gain top ratings?

For all my procrastinators: Consumerist gives 16 ways to get the IRS to audit you. Now that you’ve successfully wasted 10 more minutes, here’s how to get an extension.

From now on, if you plan on getting arrested in Polk County, don’t keep any money in your wallet.

The recession hits sport team mascots. There goes my next dream …

Journalist: “This is America. Pound Sand.”

Gina Vivinetto joins the “Will Report for Food” club. Again.

And finally, cougars are taking over Facebook. At least 10Connects.com thinks so.

According to Pinellas County Commissioner Ken Welch, who just returned from a BOCC meeting, all of Pinellas County should have curbside recycling by January 2010. That includes — yes, I know it’s hard to believe — St. Petersburg.